“Digging Up” the Truth About Potatoes – By Brittney Redstone

In a world where we try to achieve optimum health and wellness, its time to get to the “root” of all the potato debate. We’ve dug up some useful information about regular potatoes and sweet potatoes so that way you can be in the know about what exactly you’re nourishing your body with.

Originating in Central and South America, we trace back the potato to a time where it was more than just a starchy substance on the dinner table, but rather a symbol of tradition and heritage. Potatoes of all kinds have a special place in many cultures all over the world, from the famous British dish called “bangers and mash,” to the iconic Italian-based “gnocchis.”

Although, the sweet potato has been classified in the commonly sought-after “superfood” group, the regular potato is also rich with nutrients and vitamins that help support a healthy diet. Let’s dig a little bit deeper into the depths of these tuberous wonders.

On a botanical level, the potato (solanum tuberosum) is a part of the solanaceae family and the sweet potato (ipomoea batatas) is a part of the convolvulaceae family. So, yes they are technically different but with abundant similarities. For instance, both of these tubers are harvested in an array of colors ranging from a vibrant purple to a seemingly neon orange. Unfortunately, most grocery stores and supermarkets have limited access to the more rare potato types. As far as America goes, it’s no surprise that the majority of our imported potatoes are doomed to the deep fryer.

A vast majority of “fad” diets brainwash us into thinking we should lower our carb intake, leaving our tuberous friends out to dry. However, these starchy roots are an excellent source of energy that will stick to your gut and keep you full! Now, let’s not turn our heads on the fact that we smother both kinds of potatoes with fat-filled condiments, (sour cream, butter, cheese) that are exceptionally calorie-dense.

Looking at the comparison between potatoes and and sweet potatoes, we notice that the basic nutrition facts are relatively similar. It’s only when we get to the carbohydrate breakdown that we see whats actually going on. A regular potato has 692 mg of sucrose compared to sweet potatoes sweeping in with a whopping… wait for it… 2,599 mg. That’s nearly four times the amount of sucrose. But don’t panic, we are supposed to have a moderated amount of sugar in our diets.

Sweet potatoes take the cake when it comes to the amount of vitamin A found in each serving. Vitamin A is crucial to the human body, aiding in vision, immune health, respiratory system, reproduction system and cardiovascular organs. So, allow yourself the occasional decadent treat of a sweet potato— your taste buds and life-sustaining organs will not be disappointed.

The chart below breaks down the nutritional build-up and significant vitamins associated with each type of potato. 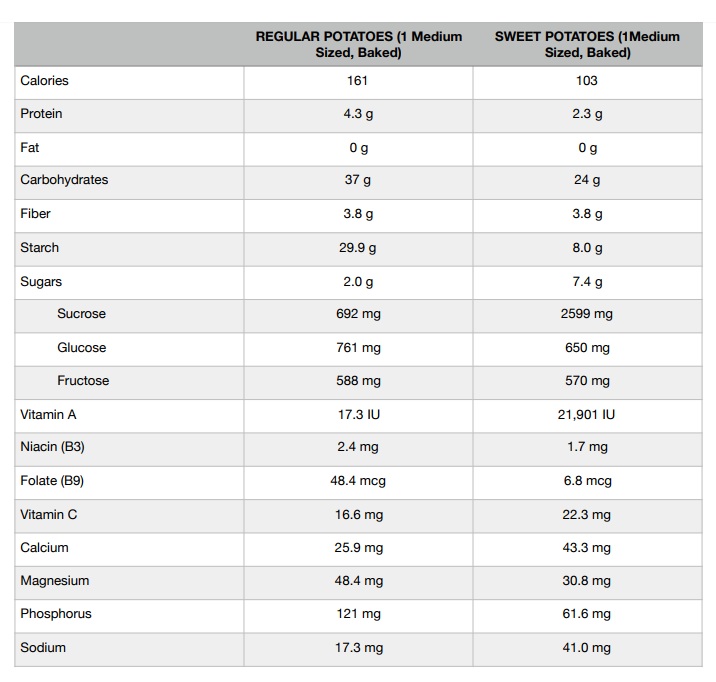 What’s the verdict? There really isn’t one. What we do know is that we shouldn’t feel partial to one type of potato against another and we should encourage ourselves to take advantage of the numerous benefits that both of these tuberous roots have to offer. So, call up grandma and beg her for that mashed potato recipe you’ve been depriving yourself from or make yourself some homemade baked sweet potato fries and catch up on your weekly shows. You and your body deserves it.